For the last several years, there’s been much talk in Hollywood about the extinction of feature screenwriting. The spec market is dead. Digital platforms are on the rise. It’s widely known that most writing jobs are in television, not features. Even the ABC/Disney Fellowship Program, designed to discover new talent, has put their feature fellowship on hold because they can’t figure out how to yield the same kind of immediate career results that happen in their TV fellowship. Furthermore, nice, character-driven, middle of the road movies just don’t get made anymore. The market has become polarized, from the gigantic, spectacle-driven, sure-bet tent poles, to the teeny, one location, no risk, micro-budgets. In production offices, Directors of Development (if their job still exists) have shifted from shaping and crafting writers and their stories to locating a script that can be shot, as-is, with  certain tax incentives in mind. Hollywood seems to care less about a good story well told, and much more about what can be monetized RIGHT NOW.

This kind of news can make a feature writer despair, and cause some to think that investing years into a craft that might never pay off just isn’t worth it. For most, it’s not.

No matter what current trend is selling in Hollywood, there will always be longing in the souls of men and women for great stories well told.  The craft of storytelling is immortal, and feature-length stories have been the medium for thousands of years.  There’s harmony found in a story whose length is designed to be long enough to explore a satisfying beginning, middle, and end, and short enough to take in at one sitting, without interruption.

Anyone who attempts to tell a story in any length, for any size screen, must learn feature screenwriting as a foundation to the craft. Even if they never go into the feature market, screenwriters need to study Aristotle’s Poetics and watch classic movies and understand three act structure in the same way that medical students need to study Latin.  Feature narratives are the root language of all screen storytelling. Without an understanding of features, screen stories in other formats will fall, uh, short.

Because of the rise of digital platforms, everyone seems to be watching this recent “change” in format closely and trying to figure out ways to be successful in delivering story content (i.e. reach more eyeballs) in a new way.  The flaw in this kind of thinking is that it presumes that stories change. Story does not change.
Instead of chasing current trends, we students of screenwriting need more of the classics. Everything that is great about a one minute short gone viral can be evidenced in any one of Aesop’s fables.

We need masters of feature writing to continue to teach the craft in the same way that we need masters of sculpture and poetry and charcoal drawings to teach theirs. Feature screenwriting is high art.  Creating delightful characters who make strong choices that further a complex, yet clear plot is high art. Building fantastic arenas which are integral to the story and delivering stunning visual imagery is high art. Doing this in a narrative format with a complex and satisfying beginning, middle and end is high art. Accomplishing this in a two-hour narrative format for the screen is the foundation of accomplishing this in any other medium.

If you agree that story matters, check out our book, Notes to Screenwriters. 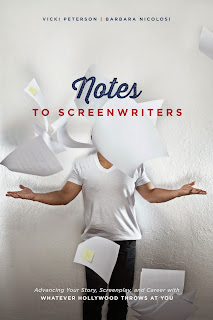