Unbreakable Kimmy Schmidt, now streaming on Netflix, is a new comedy by Tina Fey and Robert Carlock in which a woman escapes a doomsday cult and starts life over again in New York City. In the pilot, Kimmy (Ellie Kemper) delightful, effervescent, and determined to not let fifteen years of horrific abuse get her down, takes charge of her new circumstances to find a job and an apartment with world's most contagious smile on her face. 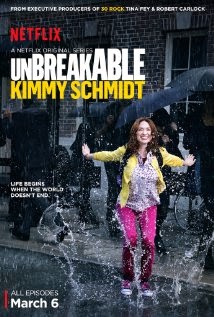 Not everyone can say they know what it's like to live in a post-apocalyptic bunker for fifteen years, so what makes Kimmy so darn likeable and relatable?

In our book, Notes to Screenwriters, we break down the four qualities of a relatable character as described by Aristotle in Poetics. Here are just a few things Kimmy does to model these qualities:

1. Goodness
Kimmy's goodness in the face of adversity is what makes her so refreshing and delightful. She is not just basically good, she is almost wholly good. She made the most of a horrific situation and she is determined not to be labeled a victim. And just when her brightness and positivity might be brushed off as innocence or denial, she springs into action to defend herself and others. Her flaws are sympathetic, too. Her occasional post-traumatic flashbacks set her off in surprising ways. She blurts out details from the bunker that she otherwise would bury.

2. Propriety
In the pilot, Kimmy catches a boy stealing candy (twice) and chases after him. This action inadvertently leads her to her new employer, Jacqueline Vorhees (Jane Krakowski) whom she quasi-mistakes as a woman trapped in an oppressive relationship needing help. Kimmy is a hero who stands up for justice. But she is also quirky and upbeat while doing so. Aristotle says that a relatable character should be quirky and strange, but not grotesque or scary. Juxtaposed with her captor, the bearded megalomaniac by day and party DJ by night, she is by far a more sympathetic character.

3. Consistency
Kimmy makes consistent choices which support her motivation to defend the weak and free the oppressed. As positive as she is, she is no shrinking violet. She stands up to bullies, including Vorhee's rotten step-daughter Xanthippe (Dylan Gelula) who try to tear her down. She is steadfast in her quest to improve her life, make a living, get an education, and protect the innocent.

4. Truth
Kimmy and her fellow "mole women" were fed horrible lies about the apocalypse for fifteen years. They were told that they were dumb and bad. They were forced to worship a lunatic. It is precisely because of this back story that Kimmy stands for truth. Interestingly enough, the four mole women react differently to their experience after they are freed. One cashes in on her "victim" status and accepts plenty of pity perks, including a boyfriend who doesn't love her. Another starts a "Mole" business- that is, the Mexican sauce, mole (get it?). The third continues to dress in plain clothes and sympathize with her oppressor. Kimmy is the only one who clings to what is good, noble, and true.

Posted by Catharsis at 9:56 AM